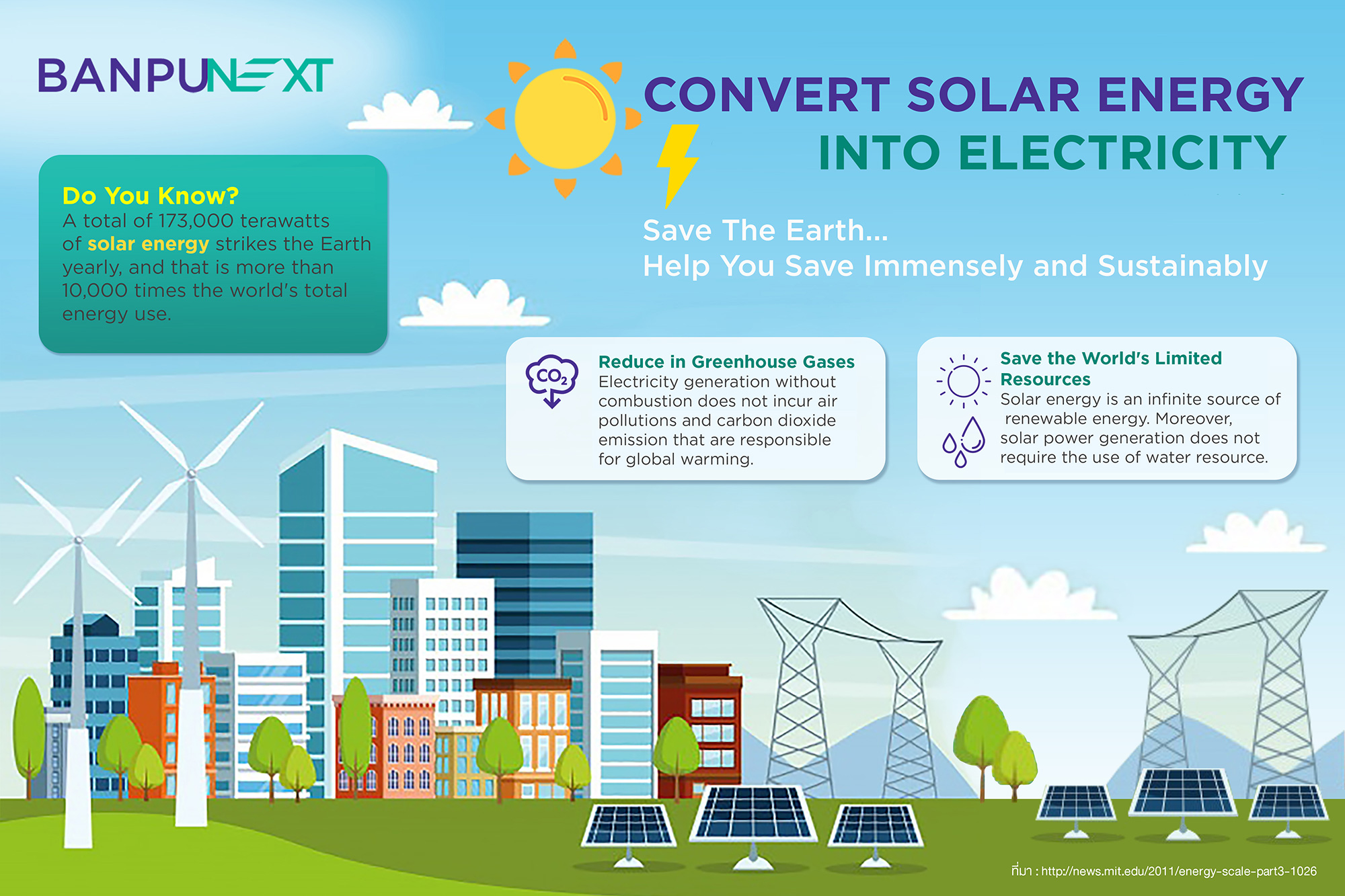 Solar energy is a source of clean energy. It also originates other renewable energy sources, such as wind and hydropower. Each year, a total of 173,000 terawatts (trillions of watts) of solar energy strikes the Earth. Although this accounts for only 35% of incoming solar radiation that reaches the atmosphere of Earth, it amounts more than 10,000 times of the world's total energy use1.

Solar energy technologies have been developed and widely deployed for more than 60 years, especially the use of solar cells to convert sunlight into electricity. The systems vary, ranging from power generation for satellites orbiting in the outer space through to more consumer-oriented solutions, such as solar rooftop and solar farm as a substitute or a complement to other energy sources in business and home applications. Solar power generation is also eco-friendly and sustainable: it helps reduce carbon dioxide emission, which is a main cause of global warming, and it contributes to conservation of water as one of the world’s most vital resources because solar cell technologies do not use water in their power generation.

Solar cells and their application as solar rooftop systems are increasingly popular worldwide amid rising awareness of the need to switch to a clean energy, as well as advanced technologies that make them much more efficient and affordable today. In the United States, for example, solar power is more affordable and prevalent than ever before. U.S. installations have grown 35 folds to an estimated capacity enough to power the equivalent of 12 million average American homes2. In Japan, the world’s first floating solar plant was built in Aichi Prefecture in central Honshu to increase the nation’s solar energy output in response to the demands. As of 2019, Japan boasted 73 of the world's largest floating solar plants and accounted for 50% of global floating solar power plants’ capacity of 246 megawatts3.

Thailand has an advantage in availability of the infinite solar energy resource. Being close to the equator, it receives a higher average of solar radiation per year in comparison to other parts of the world. Most parts of the country have strong solar energy potential: the intensity of solar radiation averaged at 18.2 megajoules per square meter all year round, particularly in the northeast and central parts of the country. As a result, Thailand has the potential to reach a solar capacity of 10,000 megawatts per annum4. With such a large amount of solar radiation as an excellent source of renewable energy, business operators or owners with high electricity demands will find it a smart way to trim down their operating costs by switching to a solar cell system; it is eco-friendly, sustainable and can provide daily power generation even when low in sunlight.

To achieve efficient power generation and distribution, a solar power system needs to be carefully designed by specialized solar engineers and professionally installed by expert technicians using high-quality devices and modern technologies. This will ensure full solar cell efficiency and system safety as well as value on investment and sustainable care of the environment.